The game «Word Association» is a simple entertaining game based on free associations. One of the players proposes some word. This word can be conceived and prepared in advance or may be the first word, which comes to mind. 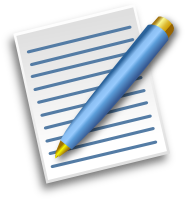 The first participant let the second one to know this word, usually the word is written down on the sheet of paper. The second participant writes down on the same sheet of paper the word, which he thought, having read the word of previous player, and passes it to the next player. Each player sees only the word written by the previous player. The process is repeated several times by turns, and then one of the participants reads out the resulting list of words. Typically, this list contains a chain of logically related concepts. There will be surprises, of course, because each person has its individual associations for the given word.

The game «Word Association» is often played with various modifications and additions. For example, the game can be improved by inventing and recording not just one word, but a whole sentence that has a logical meaning. The next player is notified only of the last word in the sentence. This player tries to understand what it is talked about. Then he composes its own sensible sentence, writes it down on the paper and says the last word of the sentence to the next player in chain. Then the process repeats. Once a sufficient number of sentences are formed one of the players read the whole story written on the paper. Usually this process is accompanied by friendly smiles and cheerful laughter!