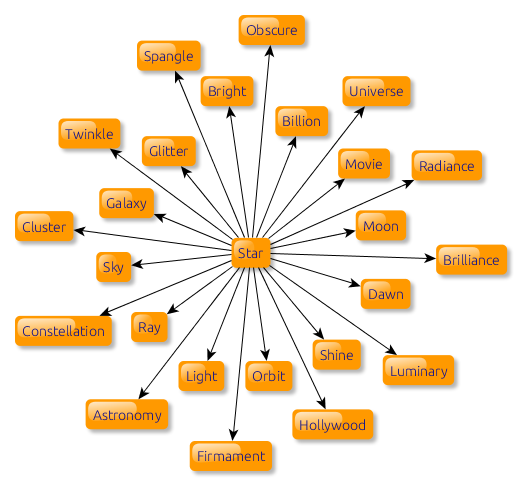 The project «Word Associations Network» gives you an opportunity to lookup associations with a given word. Word associations arise in the human’s mind when reading or saying a word, or just thinking about the word. In order to retrieve the list of associations to a word, just type in the word in the search panel and press <Enter> key or "Search" button.

It is also possible to search for a word by the first letter. Click the desired letter on the navigation pane, and you will pass to a page containing a list of words, which start with the given letter.

If the results you are looking for are not on the first page of search results, you can click "Next" and "Previous" at the bottom of the page to see more results.

For better usability each word is accompanied by the explanatory articles from WordNet lexical database. The search results can also contain images, which depict the meaning of corresponding word. Click on the selected image in order to see it in higher resolution.

The Description of the Project

The Definition of Word Association

Association is one of the basic mechanisms of memory. In a sense, they can be called natural classifiers of the conceptual content of the vocabulary of the language. Ideas and concepts, which are available to the memory of a man are related. This relationship is based on the past experience of a man and, in the final analysis, more or less accurately reproduces objectively existing relationship between the phenomena of the real world. Under certain conditions, a revival of one idea or concept is accompanied by a revival of others ideas correlated with it. This phenomenon is called the association (a term proposed in the XVIII century by Locke).

Since Aristotle the people distinguish association by similarity, contrast and contiguity.

Association by similarity is based on the fact that the associated phenomena have some common features. It represents a result of generalization of the conditioned connection in which similar stimuli evoke similar reactions (for example, excitement of synonymic series with actualization of one of the synonyms: woe - unhappiness, sorrow, grief, sadness, and so on).

Close to the association by similarity is association by contrast, the origin of which is explained by the presence in phenomena of opposite features. The physiological nature of the association by contrast is in the "mutual induction of neural processes when strong stimuli ... cause great excitement in the beginning, and then successive inhibition in the same regions of the cerebral cortex. As a result, in the future one of the contrasting stimuli can cause immediately after it something that was caused before by another stimulus (contrast with given one)" (for example, the phenomenon of antonyms: grief - joy, happiness – unhappiness, and so on).

Association by contiguity comes into existence when events are situated close together in time or space. Currently, the three mentioned types of associations are classified as simple or mechanical. Along with them, more complex semantic association is distinguished. This is, in particular, the association reflecting generic and cause-and-effect relationship between the objects of the world (for example, a flower - a rose, a disease - death, and so on).

The Role of Associations

Since the associations reflect some significant relations between objects and phenomena of the real world, and thus between the concepts, it is reasonable to conclude that they play an important role in the structure of the lexical system of the language. This was pointed out as long ago as by N.V. Krushevskiy: "Every word is linked to other words by ties of association by similarity; this similarity will not be only external, i.e. sound or structural, morphological, but also internal, semasiological. Or in other words: every word is capable, due to a special mental law, to bring in our mind other words with which it is similar, and is excited by these words ..."